Though I live in California, only six hours north of the Mexico-U.S. border, I've never been to Mexico. Until recently. I always wanted to go, but at the same time it wasn't at the top of my list--so many other places to go that aren't as close... What I didn't take into consideration was that because it's so close, it's cheaper to travel and that everything costs so much less in Mexico.

As I went to Mexico for a conference, the majority of my airfare was paid for. As such, my expenses were fairly low as compared to other places. Compared to where I live in California, I found everything exceptionally cheap.


Something I've learned over the years of traveling is that it is cheaper to get local currency from the ATM or to pay with a credit card. I only used my debit card to get money out of the ATM (I was charged to use the ATM and a foreign transaction fee). The rest of the time I used my credit card, which did not charge me any transaction fees.

I loved Mexico for its rich history and culture, especially Mexico City, but also the great exchange rates and how cheap everything was. Every time someone would tell me the cost of something and I'd repeat it incredulously, the person would either lower the price or ask me if it was expensive. It became a challenge of mine to see how fancy of a place and how much I could order. My most expensive meal was $30 including tax and tip for an appetizer, entree, 2 glasses of wine, dessert and a cup of coffee. At home, I once ordered off the starter menu and one glass of wine and spent $30, not including tip for a comparable restaurant. 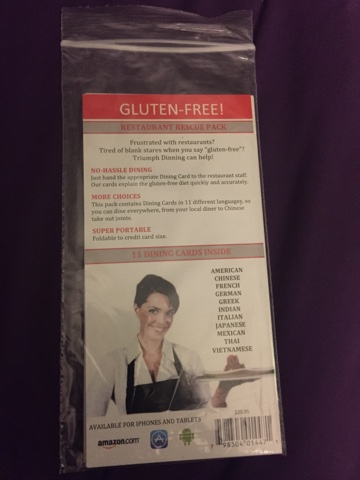 Travel can be difficult, even frightening, for someone who has food allergies. Though my daughter and I do not have immediate life-threatening allergies, we both suffer internally -- after some exposure I find myself in bed for a couple of days. While traveling is not a time I want to deal with physical sickness. I'd rather choose to stay home than deal with it. 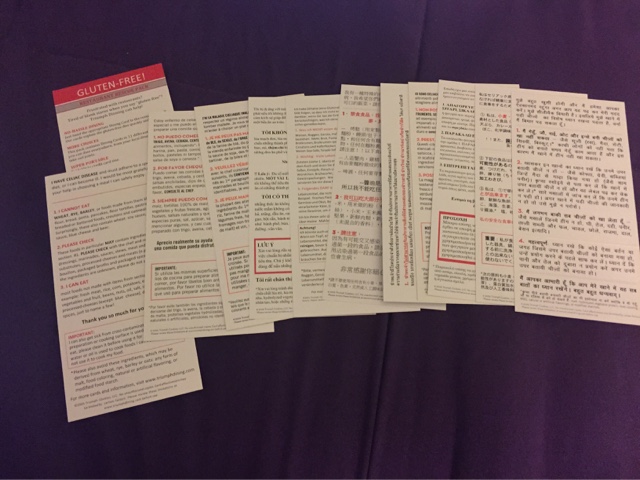 With that in mind, I've been preparing for our extended travel to Japan and what we need to take with is to be comfortable. That led me to a Facebook group, Gluten-free Expats in Japan. Which led me to discovering Triumph Dining Cards. I got my set of cards for American, Chinese, French, German, Greek, Indian, Italian, Japanese, Mexican, Thai and Vietnamese cuisine. One side is in English and the other in the corresponding language. Each card is specific to the cuisine. 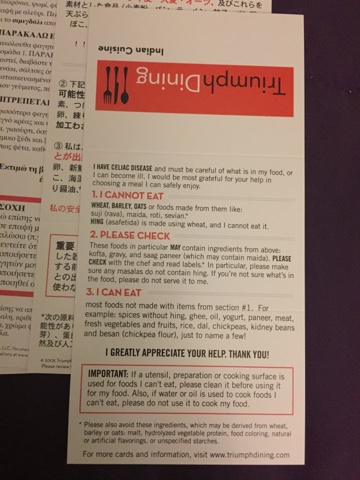 I'm feeling much more confident about dining in a different country with a different language. 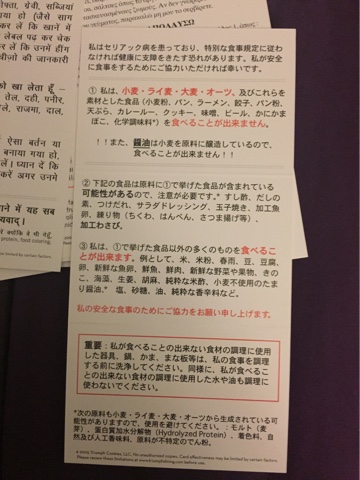 we will be on our way toward Japan. Our flight doesn't leave until 1 a.m. Monday, Aug. 17, but we'll get on the train the afternoon of Sunday, Aug. 16 for Los Angeles. 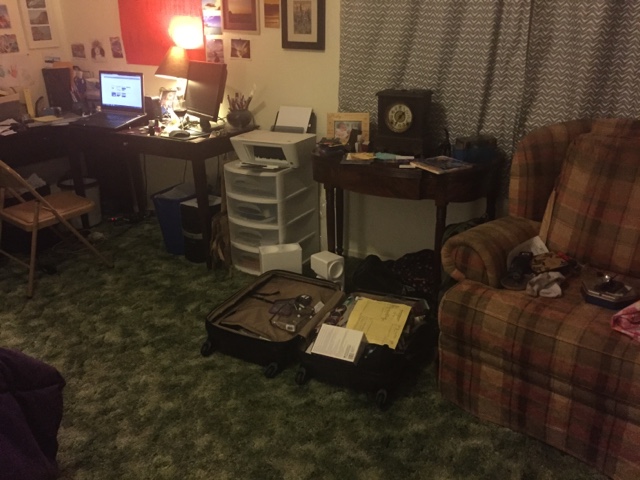 I have a mix of emotions, though now my apprehensive has dulled to nervous butterflies, with tons of excitement. I can hardly believe that in two weeks' time we will be on our way toward Japan.
My final weeks have been working as a program for an exchange program, which renders me busy all the time, even if I'm just there as a body I'm not at home. This weekend I was slated to go to San Francisco, but since only 21 of 72 students went, I got to stay home and get some things done at home.I did get enough done this weekend that the heavy weight on my shoulders has been lifted.

Posted by Unknown at 9:14 PM No comments:

It's real, and it's near

It's starting to feel real. Butterflies are in my stomach. Both excited butterflies, and the omg-what-am-i-doing? butterflies. Seriously, what am I thinking to pack up myself and my 6-year-old daughter for six months and go to another country?
Have I lost my mind? Some people have said yes. But where would be without people you leapt first and thought second.
I've learned that sometimes you have to say, "this seems crazy, and it probably is, but I'm going to not think about it and just do it."
Some examples that come to mind are the time I jumped off a large rock in the Pacific Ocean in Waimea Bay on the island is Oahu in Hawaii.
Another one is when I decided to not get a full-time, steady job with benefits and instead I pieced together a living with freelance and one-off gigs. I love it. I don't want to go back. Doing that has enabled me to pack up and head to Japan/Asia for six months. I still need to make money, but I can do it from anywhere because of what I've built--and because of technology.
I'm so excited to see what life has i store for my girl and I in Japan.
Posted by Unknown at 11:11 AM No comments:

The wanderlust bug has bitten...

I'm just over five weeks away from embarking on my next adventure--six months in Japan. With my six-year-old daughter.
I'm starting to question if I'm sane. I've already been told that I'm not.
Because...
We have a 13-hour flight from LAX to Taiwan. Then another two-hour flight to Fukuoka, Japan. The longest flight my daughter has been on is three hours, from LAX to Kansas City...when she was 7 months old and I got her sleep while wearing her. Now, when my daughter gets overly tired she sounds like a fire alarm when the batter runs low. Except she doesn't beep, it's just a single high-pitched squeal. I don't even think she knows she's doing it. It's like a warning single, don't get too close, I might bite.
I might never come back just to avoid another 13-hour flight...
38 days to go.

While exploring Waikiki Beach this morning, I walked down a concrete (let's call it something like a pier, because it went out into the water, but it's not a traditional wood pier) pier after a long and meandering path down the beach and then back via road (I just walked have a vague sense of direction, figuring if I got lost, alll the better). Walking toward the end of the pier, a man (about my age and Asian) had one hand and arm covered in small birds. An older American man was talking to him. I took a few photos of this. The American man looked at me and asked, "You want to feed them? It's free."
"OK," I said, though I was unsure about having birds on my arm. He gave me a couple of pieces of bread.
"Put your thumb of top of it so they don't make off with the whole pieces," he said.
I did that and instantly my hand and left arm were covered with birds. Zebra pigeons he said they are called. We stood there, the two of us. Not talking a whole lot to start with -- I never like being nosy, so I often have a difficult time just asking people questions. But after a while -- maybe only a few minutes -- he asked me where I'm from.
"California," I said.
"What part?"
"Central Coast."
Eventually, he mentioned Morro Bay. "That's really close to me," I said.
He and his wife lived in Seattle until they moved to Waikiki 11 years ago. He said he retired 18 years ago, but took his time deciding where to retire, until he realized that Waikiki was the place he wanted to be.
He walks out that pier nearly every morning about 7 a.m. and stays untill 10 or 11 a.m. feeding the birds and talking to visitors. He knows the other regulars who are out there boogie boarding and chats up with a smile all those who stop by. 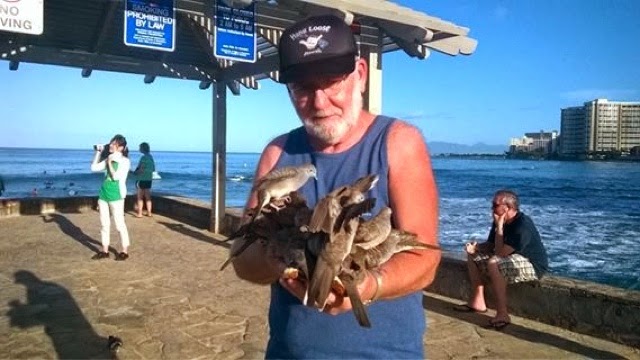 Posted by Unknown at 5:28 PM No comments:

At 2:30 in the moring my eyes were open, my body ready to go, even though I had only sank into bed three hours earlier and tossed and turned, slipping in and out of sleep, the whole time. At home, it was 5:30, already an hour after my alarm usually rouses me from sleep.
I arrived in Honolulu last night after 9 p.m., to my hostel after 10, so hadn't even figured out where the beach way or what was surrounding me. I was ready to explore, but since the sun wasn't even peaking over the horizon yet, I promised myself a sunrise walk if only I stayed in the twin bed -- a spring digging into my side -- for another two to three hours. So I did. Every so often, every 15 minutes it seemed, I would open my eyes, put my glasses on my face and glance at the digital clock on the stove across the room from my bed.
3:04
3:18
3:37
3:52.....
Finally, 5:03 came up.
I rose, grabbed my new bikini, never worn except to try it on in my closet imagining myself actuallly wearing it on the beach...in Hawaii, shorts and cover up top, changed quickly in the small bathroom, careful to not wake my three roommates all soundly sleeping in their beds. Two of the women stumbled into the room around 2 a.m., I thought it was much later, until I put on my glasses and saw the time.
In my beach clothes, flip flops on my feet and bag with beach mat, towel, water, smartphone, pen and guides on my shoulder, I headed out. The friendly man with an Austrialian accent at the front desk gave me directions to the beach.
"It's easy, Love. Take a right out the door, then turn left at the next road and it's a block up," he said with a smile.
The beach was the opposite way that I imagined and the opposite way that I would have gone on my own.
When I turned the corner, I saw narrow palm trees coming out of the light brown sand with blue water lapping onto shore. There were a few other early birds up walking around. Probably afflicted with the same jet lag that I had (well, still have).
I stopped where the sidewalk met the sand, closed my eyes and breathed deeply, bringing in the warm arm, smelling the tropical flowers on the trees around me, and hearing the water lap onto shore. There weren't a lot of other sounds, most of Waikiki still being asleep.
I then took off my flip flops and with them in hand, walked straight into the water. Not far, just enough to feel it. People who have been hear before insisted that the water was warm like bath water. I believed them, I really did, but still expected to gasp with surprisse when it was ice cold. But I did not, because it was warm, just like they said.
I was prepared to sack out on the beach to enjoy the early morning quietness and take a swim, but overwhelmed with excitement to check out the new place, I just kept walking. I took a few photos, but just took in the sights, smells and sounds of my first real day in O'ahu. My first time, even, in Hawai'i. 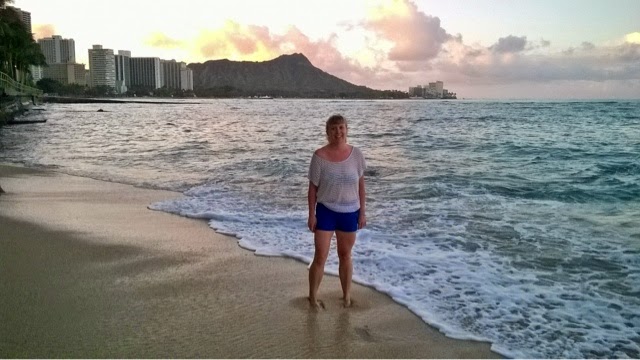 I was just going to take a selfie of me with Diamond Head in the background but happened across a couple from Texas taking photos of each other. I offered to take one of them and they took one of me. Tip for people traveling solo, offer to take photos of others because it'lll make it easier for you to ask for them to do the same (or they will offer), so that you get soe photos of you on vacation that aren't all selfies.
Posted by Unknown at 11:03 AM No comments: